Today a report about the RTG has been published in the UniZeit, newspaper of Kiel university:    download pdf

"A doctoral researcher of the Research Training Group "Genes, Environment and Inflammation" meets the ADAMs when starting his PhD on proteases. The aim of this project is to understand how these are influenced by the environment. Chronic inflammatory diseases are not only genetically determined. Although in over 80 percent of cases environmental factors are considered to cause or promote chronic diseases, still little is known about the interrelation between the environment and genetics. The Research Training Group (RTG) »Genes, Environment and Inflammation« was initiated at the Universities of Kiel and Lübeck to study environmental influences responsible for the development of complex, chronic inflammatory diseases such as Crohn‘s disease, psoriasis, arthritis or Alzheimer‘s disease. This RTG deals with a special subject within the field of biology called epigenetics. Epigenetic changes are modifications in a chromosome which occur without alterations in the DNA sequence and can cause the activation of certain genes. »We suspect that environmental factors such as the bacterial flora or nutrition interact with epigenetic modifications of the DNA and promote the development of chronic inflammatory diseases«, says the spokesperson of the RTG, Professor Andre Franke from the Institute of Clinical Molecular Biology at Kiel University. The RTG started in October 2012 with a funding of 2.4 million euros from the DFG (German Research Foundation). The project was formed by nine young professors of the Cluster of Excellence »Inflammation at Interfaces« who wanted to establish a highly interdisciplinary working program especially for young scientists.
During the first funding period, lasting until March 2017, eight doctoral researchers will have the opportunity to work in close cooperation with scientist and clinicians of various institutes at both Kiel and Lübeck. One of these doctoral researchers is Felix Kordowski. He is doing his PhD at the Department of Dermatology, Kiel University, under the supervision of Professor Karina Reiß. Her research group deals with a special kind of proteins called proteases. Acting like the bearers of a message, they mediate signals within cells. In doing so, they cut particular structures of signaling proteins. The mechanisms that modulate the activity of the cellular cutters are not understood to date. What is known however is how the speed of protease action can be influenced, and that there are good and bad cutters. »Our aim is to analyze how environmental factors influence protease function, particularly in inflammatory diseases«, Reiß explains. »To give a simplified example: we want to find out if people who go for a daily walk rarely get Alzheimer`s disease.« 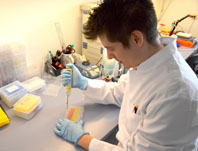 And that’s the challenge facing Felix Kordowski. He focuses on ADAM12, a member of the ADAMs family of proteases (ADAM: A Disintegrin And Metalloproteinase). Kordowski started comparing the expression levels of ADAM12, which means the amount of protein within normal tissue and inflammatory diseases. If he finds significant differences he will continue to analyze the impact of ADAM12 expression on the development of this disease. An altered level of ADAM12 would indicate an influence on the development of diseases. »We plan to screen different patient cohorts to see if environmental factors such as nutrition or drugs have an influence on ADAM12«, Kordowski says. To this end he is working in close cooperation with Professor Reiner Siebert from the Institute of Human Genetics at Kiel University. Siebert has collected several large patient cohorts and is an expert on epigenetics. »This is one of the benefits of working in the Research Training Group«, Kordowski explains. »We work in a large interdisciplinary network and so we have direct access to the scientific expertise of other group members and the support of several researchers.« For example he can use this network to learn new methods for any of his laboratory assays which are not conducted routinely in his own research group. In addition to working on their individual projects, the RTG doctoral researchers also participate frequently in joint seminars and practical training courses. These include molecular and cellular biology methods, soft skills courses, or workshops on writing scientific publications. Felix Kordowski participated in a workshop on crisis management right after beginning his PhD. After this optimal preparation he can now start his laboratory assays to analyze the ADAM family." Dr. Ann-Kathrin Wenke