When I was still a child in school, I was very much interested in nature and especially in animal movies and how they were made. My hobbies always centred on nature, e.g. hiking, fishing and hunting, so I decided to study biology after school. In contrast to this, I have always had a great interest in computers, too. While studying, I became very involved in the subject of molecular cell biology and especially interested in developmental biology. At the same time, I also studied informatics, so I eventually learnt more about programming and databases. Having worked on high-throughput screening method development during my diploma thesis, I wanted to carry out a PhD in a related field. Funnily enough, I ended up again with a job in the same city of Kiel, this time at the medical faculty, which was my good fortune. During my thesis, I worked on one of the first genome-wide association studies for Inflammatory Bowel Diseases, i.e. I studied thousands of genetic loci and their potential disease relevance. For me, this was really like mining for gold and finally, we also identified a big “nugget”: the first description of the autophagy pathway association in Inflammatory Bowel Disease. At that point, it was also a big challenge to analyze such large GWAS data sets, a method that has meanwhile been brought to perfection in many groups.

I head the genetics and bioinformatics group within the institute of Clinical Molecular Biology (ICMB) of which I am one of the directors. I am in charge of the high-throughput facilities at the ICMB. In August 2008, I became an assistant professor within the DFG excellence cluster “Inflammation at Interfaces”, and in April 2010, I received the W2 Peter Hans Hofschneider endowment full professorship from the Foundation for Experimental Biomedicine.

My main interests are the development and establishment of novel high-throughput genetic/genomic technologies, the inherent bioinformatic integration and application of both to identify the genetic and epigenetic causes of chronic inflammatory, as well as other complex diseases like Crohn’s disease and psoriasis. Having worked primarily on genome-wide association studies for the past few years, my research agenda currently focuses on other high-throughput screening agendas such as microRNA, microbiome and integrated approaches. Novel foci are also the establishment of a clinical data warehouse and systematic gene-microbe interaction analyses. 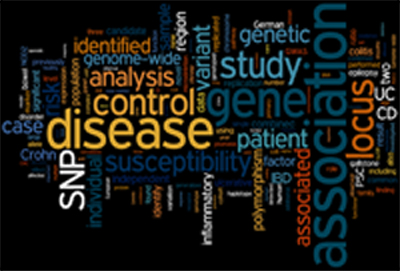 Why RTG Genes, Environment and Inflammation?

From the current data we know that only about 25% of the complex diseases are explained by common genetic risk factors. A large proportion of the so-called missing heritability is likely due to rare genetic factors, the environment and gene-environment as well as gene-gene interactions.Therefore, we decided to address this important niche with a group of several young investigators. I find it very stimulating to work in such an interdisciplinary environment. It is possible to start out with an ambitious research idea and to see it addressed with the help of experts from different fields. Inflammatory diseases may only be really understood if we look at more than genetic factors. Again, the available rich set of (high-throughput) methods is a very attractive advantage of the region and the group.